Once your company is verified on Console Connect you can order ports from any of the listed data center locations.

How to: order a port

NOTE: We may run promotions where we might send the LOA to your data center on your behalf.

VIDEO: HOW TO ORDER A PORT 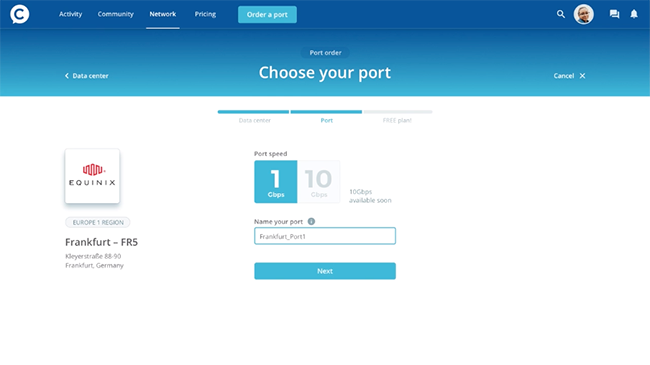 Why can't I order a port?

Your company must be verified before ordering a port.

What if my data center isn't listed?

If your data center isn’t listed, there is a good chance it is on our roadmap. Please get in touch to discuss!

At console connect we provide many ways of interconnecting. Whether you are connecting to your own sites, a business partner or connecting with a cloud. Checkout our guides below to get you on your way!

How to: Connect between my own sites 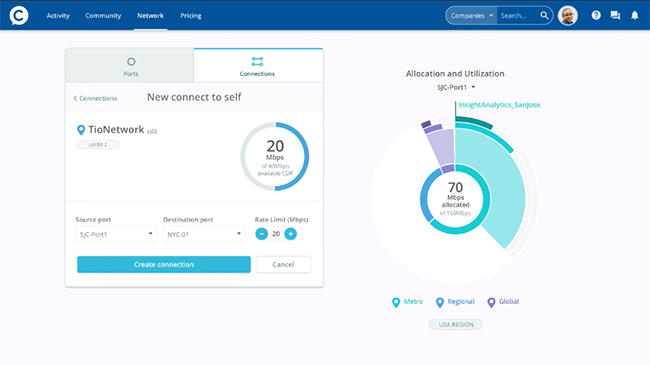 Connect to a business partner

How to: Connect to a business partner

My connection is still pending, what should I do?

If a connection request you have made to another Company is still pending after some time, we suggest sending them a message. You can do so from their profile or from within the pending connection screen.

How do I accept and incoming Interconnection request?

You’ll receive notifications about incoming interconnection requests by email and/or within the web app, depending on your preferences.

You can accept the connection as requested, accept it at a lower speed, or reject it.

Can I accept an interconnection request at a lower rate?

You will need to have an account with the Cloud Service Provider (e.g. AWS or Miscrosoft Azure) before you connect to them on Console Connect. See the our Cloud How To guides:

See the our Cloud How To guides below: 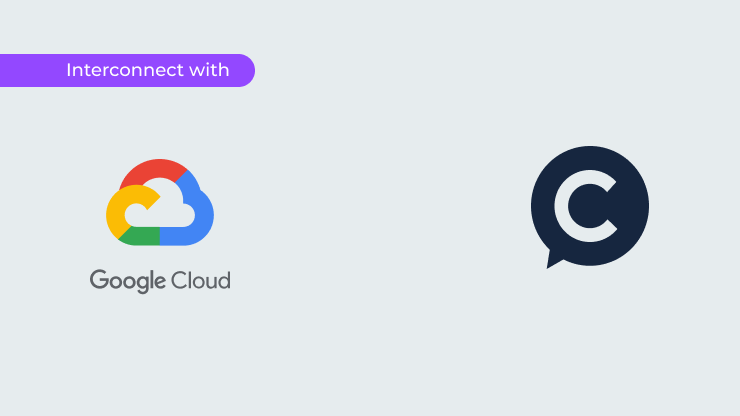 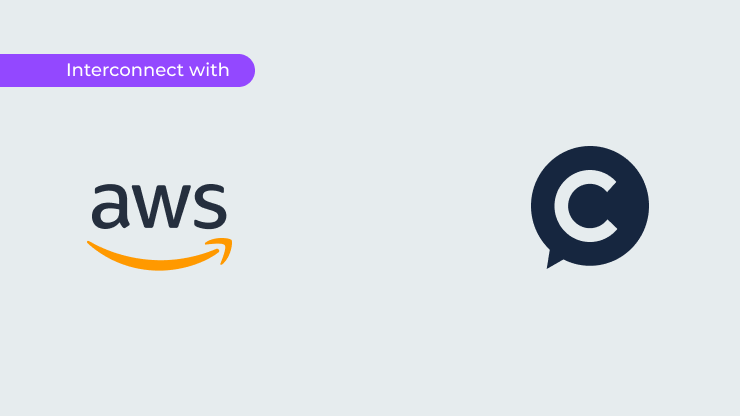 Please contact your Business Development Manager or get in touch with us to discuss your needs! 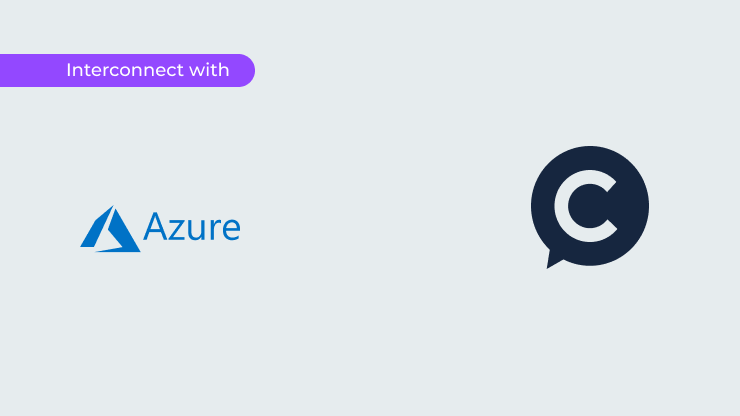 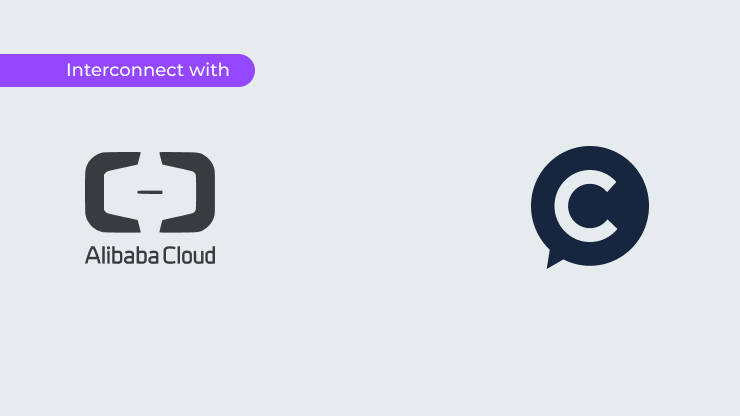 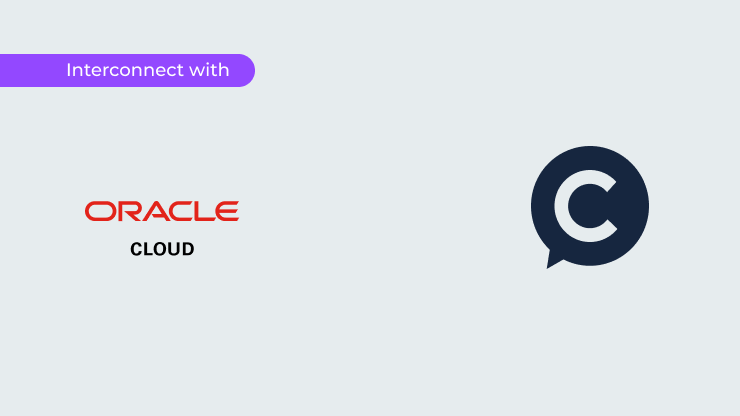 Flex allows you to increase or reduce the connection bandwidth on demand without changing your contract.

Currently Flex can only be ordered on connections you have ordered to pay by invoice between your own sites.

How do I order Flex?

You can Flex your bandwidth by clicking on the Flex link near the rate limit on the settings tab when you are viewing your connection in Console Connect.

When can I order Flex?

You can request Flex anytime for an Active or Disabled Connection.

How will I be charged for Flex?

Your existing contract will still be invoiced for your base level bandwidth. Additional Flex bandwidth will be invoiced separately at the end of each month. You will only be charged for the period that any Flex Bandwidth was active during the month.

How do I stop Flex?

To stop a Flex you just need to follow the same steps for ordering the Flex and change your connection rate limit back to the contracted limit.

How long does it take for the Flex to be processed?

Flex requests are processed automatically once you have submitted the request and will take a few minutes to be applied.

Select from below for more information.

What is the maximum bandwidth I can request for a connection?

You can use as much bandwidth as you have available (not yet allocated) on your port.

If you are connecting to another Company, your bandwidth may be restricted on their side. Companies may choose to accept Connection requests at the requested speed, a lower speed, or reject it.

We will never expose details of any other company’s bandwidth, either allocated or available.

I've run out of bandwidth. What can I do?

You can order additional ports, terminate connections, or Flex down (reduce) bandwidth assigned to connections.

What happens if I disable a connection?

Disabled connections will remain configured on the network but will not pass traffic. Note that while a service is disabled the service will still be charged.

How do I delete a connection?

To delete a Connection, you will need to disable it first. Then, from Network → Connections → Disabled you can delete the Connection.

If you are deleting a Connection to another Company, we suggest you reach out for a chat to let them know!

How do I create an IO-D service?

To create an Internet On-Demand service in Console Connect, follow the instructions in our how-to video: 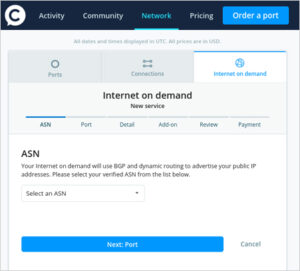 Can I create an IO-D service using a private ASN?

Yes if you don’t have a public ASN.

Can I create an IO-D service using static routes?

Not at the moment. This feature is on our roadmap.

How do I disable or delete an IO-D service?

This feature is not yet available. In the meantime, please contact support@consoleconnect.com to disable or delete a connection.

What if I have my own ASN and my prefixes are registered in an IRR?

Once your order is received and provisioned, it may take up to an hour for your prefixes to appear in our systems. This will depend largely on when you registered your route object(s) in the approved IRR database(s). Note that you must advertise a /24 subnet or larger.

What if I have my own ASN and I bought IP address space from PCCW Global?

Adding or updating ASN or AS-SET is only supported by the backend.

What is a default route?

What you are choosing here is between receiving the full internet routing table, which is approximately 850 thousand routes / prefixes or receiving one route, that is the default route (0.0.0.0/0). Usually if you have a smaller router, and you are buying Internet On-Demand from Console Connect, you will want to leave this option as is, as getting the default route from us will be the easiest option in terms of configuration. If however you are a network engineer and want to set routes, communities and other bgp attributes, you will definitely want to disable this option to get the full internet routing table.

DDoS (Distributed Denial of Service) attacks have become a great security threat, especially to customers who operate popular websites or do business via the internet.

PCCW Global offers its anti-DDoS service in two packages, On-Demand and Hybrid. In the On-Demand package, we monitor your internet traffic utilization at your CE router for possible DDoS attacks. When a DDoS attack is detected, all traffic destined for the victim Ip will be manually rerouted to an intelligent filtering device. The attack traffic will be filtered out and legitimate traffic sent onwards to your network.

In the Hybrid package, an Intrusion Prevention System (IPS) is provided and installed in your premises. The IPS will monitor all internet traffic for possible DDoS attacks. When a DDoS attack is detected, the IPS will perform auto-mitigation on suspicious traffic. If the traffic volume is so large that the internet link is saturated, the DDoS attack traffic will be routed (upon Customer approval) to our Premium Scrubbing Center for traffic mitigation.

An online Anti-DDoS Customer Portal allows you to view the above processes online.

Many customers prefer to outsource the provisioning and management of their Customer Edge (CE) routers, which connect to the PCCW Global network.

From installation, operation, upgrade, and maintenance, to parts and end-of-life/end-of-support process monitoring, PCCW Global’s Managed Firewall Service takes the overhead out of regular configuration and maintenance tasks that can be tedious and time-consuming.

We support offerings from the leading firewall vendor Fortinet. Combined with our Threat Intelligence and Management Service, organisations get a reporting dashboard and firewall configuration system, along with professional services for firewall management, security monitoring and incident reporting.

The PCCW Global Looking Glass can be found here.

Note: PCCW Global name servers are deployed by region, not by country, and may not comply with the legal restrictions of individual jurisdictions or countries within a region. For this reason, the most common setup is to use country-based open resolvers like Google’s 8.8.8.8/8.8.4.4 or Cloudflare’s 1.1.1.1/1.0.0.1. A more complete listing of open resolvers can be found here.

Traditionally, DNS lookups are sent to resolvers in plain text, which can leave end users vulnerable to eavesdropping and person-in-the-middle attacks. DNS-over-HTTPS (DoH), addresses this issue by sending lookups over an encrypted HTTPS connection between the end host (stub resolver) and the recursive resolver. Using DoH improves privacy by preventing your queries being seen by someone lurking on public WiFi or personal information related to your browsing behaviour being gathered and/or sold.
Oblivious DNS over HTTPS (ODoH) is a new proposed standard that separates user IP addresses from queries so that no single entity can see both at the same time, as illustrated below.

Configure your web browser to use DoH using the following instructions:

Microsoft Edge
On the edge://settings/privacy page, select Use secure DNS to specify how to lookup the network address for websites.

Google Chrome
Select Use secure DNS on the chrome://settings/security page.

Questions
Here are the answers Mozilla gave to some frequently asked questions about DoH.

Simplify the ordering, deployment and change management of your entire global IoT network with Console Connect.

From real-time activation and deactivation of devices, service configuration and traffic monitoring, you benefit from end-to-end control and visibility over your global IoT assets.

What mobile technologies are supported?

Presently 2G, 3G, and 4G are supported worldwide.
5G and NB-IOT technologies are in the roadmap to be supported soon.

What types of connectivity are available with your IoT SIM?

By default all Console Connect IoT SIMs have internet connected SIMs. All SIMs utilize IPv4 addresses and are NAT. A firewall service to increase security is in the roadmap.
Fully private IoT connections using Console Connect to access Enterprise networks or Cloud service providers are also available. If you are interested in this option please contact iot@consoleconnect.com.

What type of latency performance does your IoT SIM offer?

The latency performance of the Console Connect IoT SIM are dependent on what technology is used (2G, 3G, or 4G). In terms of routing, all IoT traffic is routed through our Singapore IoT gateway.

What type of performance can I expect with the Console Connect IoT SIM?

Performance is highly dependent on the technology, device, mobile network operator, and local conditions where the IoT device is located.

Customized APNs are supported, but are presently not available for ordering via the online portal. If you are interested in this option please contact iot@consoleconnect.com.

Are other price plans available?

Other price plans including SIM bundle and pooled plans are available by contacting us at iot@consoleconnect.com.

How do I manage my SIMs?

All users of Console Connect IoT will receive access to a SIM management portal.

The SIM management portal is located here and credentials are sent by email together with your first IoT order.

In the SIM portal users can manage their SIMs (activate, deactivate), check on SIM performance, and perform troubleshooting.

What kind of SIM cards do you provide?

Can I send/receive SMS or initiate/receive voice calls?

On the online ordering portal data only services are provided.

If SMS or voice services are required please contact iot@consoleconnect.com.